A visit to the Cueva del Llano in Villaverde provides the opportunity of entering deep into the earth, but also of finding out about the animals that populated the Island thousands of years ago or how this volcanic tube was formed. All this through a guided tour of the depths of Fuerteventura. 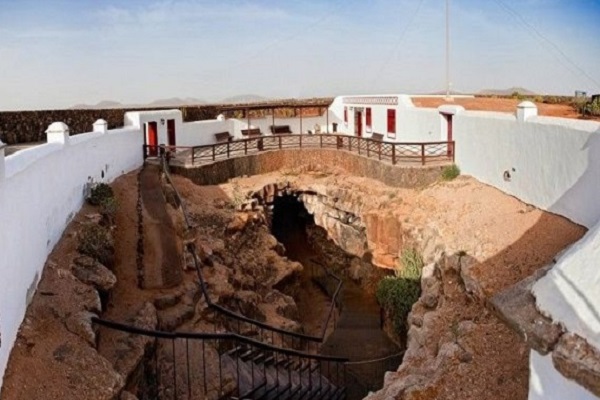 The Cueva del Llano was formed after the eruption of the Escanfraga Mountain volcano, the antiquity of which exceeds 800.000 years. The length surveyed to-date is 648 metres although the last 200 are difficult to explore. In some parts the height exceeds some six metres.

Prior to entering the depths of the cave, visitors can visit the interpretation centre and find out about the entire geological variety of Fuerteventura, the oldest island of the whole Canary archipelago. There is also information on the wealth of its soil and visitors will be surprised to know that Maxorata is one of the few places in the world in which plutonic rock can be found on the surface.

In the gallery, geology lovers will see the different layers of sediment and fossils which over thousands of years have been deposited along the tube. Geological stages during which Fuerteventura went from being a more humid island to the desert land we know it to be today.

In its interior the cave has an interesting collection of fossils, some of which belong to extinct species such as the lava mouse or malpaisomys, very common some two thousand years ago but which became extinct with the arrival of man and the common mouse. Remains have also been found of the Canary Islands Quail, a species similar to the common quail which disappeared due to its elimination by predators introduced by man.

As a curiosity, we can tell you that there are fossil molluscs more than 15.000 years old which correspond to the cave’s initial formation period.

And yet the cave still retains hidden animal species within its interior. This tube has an exceptional inhabitant: the invertebrate harvestman (Maiorerus randoi), similar to the spider and exclusive to the Cueva del Llano in being the only cave in Fuerteventura with the appropriate environmental conditions. This species is one of the seven arthropods which are in danger of extinction on the Canary Islands.

The cave is the only one in Fuerteventura that can harbour cave species. This is due to the high humidity and to the environmental stability, which in turn is a consequence of two circumstances: the location of its mouth in the valley, acting of drain of rain water, and the backfill of its cracks by clay, which impedes rapid evaporation.

The subterranean level has a poor ecosystem, due to the high environmental humidity and the absolute darkness. The animals that populate this level are, mostly, insects and arachnids adapted to live permanently in the darkness.

The cave is a million years old. It is a lava pipe whose length is 648 meters, although the last 200 prove difficult to explore, as they are almost plugged by sediments. The passable zone of the pipe is of considerable dimensions, with widths from 7 to 12 meters and heights between 3 and 5 meters. The slope is low, of barely a degree and the walls, worn by the passing of time, have tide marks of clay that indicate the different levels of flood that the cavity has suffered. There is another branch some 40 metres from the entrance that has been completely blocked by these sediments.

The volcanic eruption that caused the Cave of the Plain has been a mystery for a long time. The pipe, as indicated its name, appears in the middle of a plain, (Cuevo de Lllanos means cave of the plains), without any apparent connection with some volcano or nearby eruption. The erosion, sedimentation and subsequent eruptions have erased the tracks of its development, and scientists have had to use indirect means to determine it origin of the cave.

It is the oldest zone on the island and represents the phase of underwater growth, which happened more than 20 million years ago, the oldest materials having an age of 70 million years and more. Geographically it is in the zone known as the Massif of Betancuria, where there have been other subsequent geological phenomena. These have helped construct the main nucleus of the island. Three main volcanoes with ages between 12 and 20 million years built the island. The main one, at Betancuria, surpassed 3.000 m in altitude. Nowadays the island is very eroded (the Betancuria Massif is only a few hundred metres high) and it is difficult to reconstruct the history of the island with accuracy and detail.

The geological data places the origin of the cave in the volcano of Mount Escanfraga, whose age surpasses 800.000 years. This age is calculated from the magnetic polarity rather than by the caliches (covering layers). The lavas of the cave and of Escanfraga have inverted polarity (the most recent inversion of terrestrial magnetism occurred some 800.000 years ago). Thehe nearby Cave of Villaverde has a normal polarity that suggests a later eruption that poured new lava over the lava arising from Mount Escanfraga.

A Lake of Lava

The cave is a volcanic pipe that was formed from a pool of lava that was emptied slowly. While the surface of the lake solidified, the liquid lava of the interior flowed away, leaving enormous empty spaces. The sediments that accumulated in the cave are the result of transportation from outside and the erosion of the walls of the pipe. Water and clay, as well as the remains of animals that today we see fossilised, were transported from the small catchment area.

There are five phases of deposits that show how two humid periods have alternated with drier ones. The most humid epochs are detected by the abundance of species associated with humid conditions, as is the case of some terrestrial conches. The mollusc fossils of the first period have been dated to some 15.000 years, and the second to around 7.500 years.

The fossils of the Cave show Fuerteventura as an island that has had humid periods, with more vegetation, as indicated by some of the species found. The sediments have also conserved the remains of vertebrates that are extinct, such as the bobwhite canary (Coturnix gomerae) and the lava mouse (Malpaisomys insularis). Mammals, reptiles and birds are among the vertebrates appearing in the fossil register of the volcanic pipe, and most of the vertebrates found are the result of the feeding habits of other species, such as the common owl. Other remains have been carried to the cave in the water and clay.

Undoubtedly all these curiosities will encourage you to visit the Cueva de Villaverde. Fossils await you. Come and discover them.