South of Corralejo there is the 11 km long dune area of the National Park (Parque Natural de las Dunas de Corralejo). The sand is very light-coloured and fine. 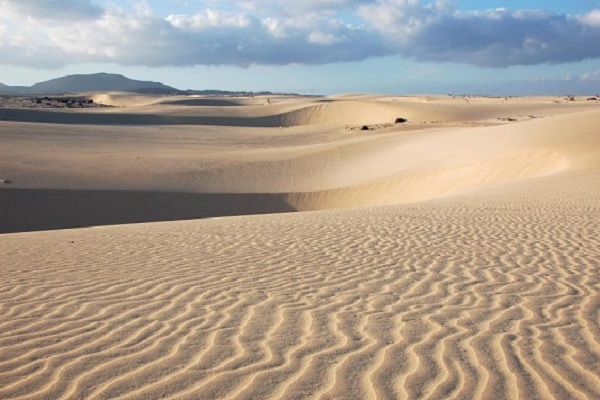 The Dunes of de Corralejo are located in the north of Fuerteventura, about 30 minutes by foot from Corralejo. The Dunes as well as the beaches are part of the nature park.

Probably the most famous of all of Fuerteventura´s natural attractions, the Dunes or El Jable are just outside Corralejo and are like stepping into the Sahara, which in fact lies just 60 miles away.

El Jable essentially comprises 2,400 hectares of continually shifting sands, as the dunes themselves move and change on a daily basis due to the influence of the almost constant strong winds coming in from the North and North East. The Dunes was put under nature protection in 1982. The appearance is almost identical to the Sahara, except that the sand dunes are actually made up of shells.

Surprisingly perhaps this area is home to an assortment of well-adapted flora and fauna such as lichens and plants like tree tobacco (nicotina glauca) and over a hundred different species of invertebrates such as lizards and geckos.

Take some water and sun protection and loose yourself in the desert or hook up with a camel train for that real Lawrence of Arabia experience.

The nearby beaches have light sand, however, swimming is at your own risk as there are no lifeguards and then area is flagged red, meaning that it is rather dangerous to swim there. If you to take the chance and get into the water, you will be rewarded with a rock-free bottom and perfect underwater sight.

The beach of this area is 7 kilometers long, making it very attractive for people wanting to walk along the beach as well. If you get hungry after a long walk there is a snack bar right on the beach.

From the beach you have an excellent view of the Los Lobos and Fuerteventura Islands.